Conjunctivius is a boss in Dead Cells, found in the Insufferable Crypt.

Conjunctivius is shackled to the walls by three chains. Four platforms are arranged around the room.

Damage of a single hit is capped at 15% of Conjonctivius' maximum health. The damage cap for her tentacles is 25%.

A series of lore rooms scattered around the Toxic Sewers and Ancient Sewers explain how Conjunctivius came to be.

It begins with a nameless, faceless corpse in the Sewers, likely infected by the Malaise. The body is bloated and one of its arms has mutated into a tentacle[1]. Green goo trails from the body towards a small hole in the wall.

"The body is all bloated... One of his arms changed into a tentacle. It's as if the body had started to mutate! A viscous substance is oozing out of the body and across the floor... like a snail's trail."

After this encounter, the Beheaded finds that same trail of green goo and an empty cocoon next to a bigger hole in the wall, made by an adolescent Conjunctivius [2].

Later, the Beheaded stumbles upon the trail of green goo close to a corpse. The trail leads to the remains of a huge cocoon and a gigantic hole[3], which was carved by the adult Conjonctivius as she escaped.

"Still this trail on the ground. Whatever this thing is, it's pretty obvious that it... grew. Or evolved. Or mutated."

The corpse doesn't seem infected and wears prisoner clothes, which may imply it's the prisoner who escaped from the Prisoners' Quarters. Why he is uninfected despite being killed by Conjonctivius is unclear. Finally, a message left by soldiers tells how difficult it was to chain Conjonctivius , likely an order of the King.[4] This explains why Conjonctivius is imprisoned in the Insufferable Crypt when the Beheaded arrives.

Make sure you don't miss your guard duty outside the MONSTER's room. It wasn't easy to chain up. Wouldn't like to have to do it all over again!

Conjunctivius moves around the room, attached to the walls by three non-damaging chains. She has three primary attacks:

After the second tentacle phase, Conjunctivius gains a new attack: she deactivates the platforms and rapid-fire spits projectiles from her eye.

After reaching 75%, 50%, and 25% health, Conjunctivius will break a shackle and summons tentacles. All the platforms are deactivated and she moves to the center of the room, immune to damage.

She spawns 3 tentacles in the first phase. Another tentacle is spawned for each subsequent phase.

After destroying a tentacle, the remaining tentacles will increase in speed. 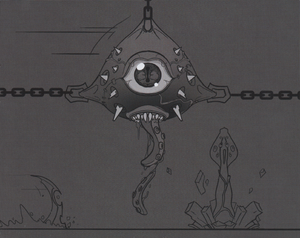 Early concept art for Conjunctivius ' tentacles coming out of her mouth. This was later scrapped.