From Dead Cells Wiki
Jump to: navigation, search
Once frequented by the lords and ladies of the island, they often noted that some of the mushrooms seemed to shrink from their presence.
Dappled light, soothing fountains and a fresh air brought the royals, aristocratic and various hangers-on. Unfortunately they brought the stink of the Royal Court with them...
Earthy smells of compost, spores and decay fill the air of the dilapidated Arboretum. The new inhabitants seem to like the climate quite a bit.

The Dilapidated Arboretum is a second level biome that was introduced with the Bad Seed DLC.

Dappled light, soothing fountains and a fresh air brought the royals, aristocratic and various hangers-on to the gardens and serres of the arboretum to escape the hustle and bustle of the castle to have some moments of peace and relaxation. However, the fragrance of their perfumes had, unbeknownst to them, disturbed the local flora and fauna. Now the arboretum, a shadow of its former glory, attracted a different kind of visitor, who enjoyed the earthy smells of compost, spores and decay very, very much.

The Arboretum can be accessed from the Prisoners' Quarters via a

Teleportation rune after having first accessed the area with the Dilapidated Arboretum Key.

There are three exits out of the Arboretum, which consist of the Prison Depths (requiring a Spider rune), the Morass of the Banished, and the Ramparts.

In the Arboretum you will find two unique enemies, the Yeeter and Jerkshroom.

The table below lists which enemies are present in the Dilapidated Arboretum on each difficulty level and which blueprints each may drop. When applicable, the minimum difficulty level for blueprint acquisition is specified. 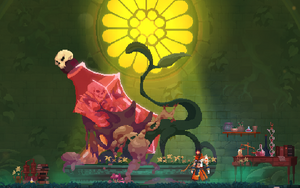 The botanical beaker in the middle of the room.

The room depicted in the following picture contains three items that can be examined:

When examined, the Beheaded reads the following text written by an unknown person, presumably some sort of guard:

Today it's the plants that are up and raising hell.

The King's new best friend has ordered one of them captured... Alive...

When examined, the Beheaded exclaims the following:

How did they get the skeleton in the bottle?

When examined, the Beheaded observes that:

"Man vs Wild" and other botanical treatises are spread out on the ground.

I wonder what's in this flask... 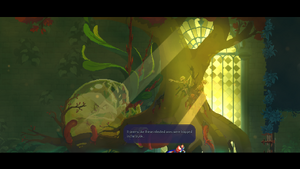 The giant tree with a victim and a broken flask.

It seems like these infected ones were trapped in the trunk...

Makes you wonder who was the sick one in this story...

Upon examination the Beheaded makes the following observations:

The skull of a giant crow mixed in with various bits of mushed and mashed organs, entrails and local roots...

...connected to the bark of an old red giant tree. 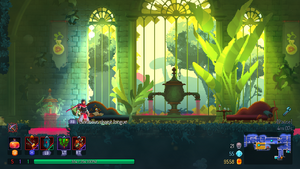 A bunch of leather bound books...

I wonder which noble had their personal garden here.

Gloves, a pitchfork... Maybe a courtier tried their hand at gardening?

No, you wouldn't find one that would sit on such a shabby piece of furniture.

Or wear this outfit.

It seems the gardener had his entrances into the palace too.