There are currently seven keepers in the game: The Concierge, Conjunctivius, The Time Keeper, The Giant, The Hand of the King, and The Collector. The seventh, Mama Tick, is only available with the Bad Seed DLC.

As the first boss, the player may find one of these three, depending on the path that they take.

The first boss encountered in the game, as he requires only the Vine Rune to be reached. Found on the Black Bridge. Must be defeated to reach the Stilt Village. 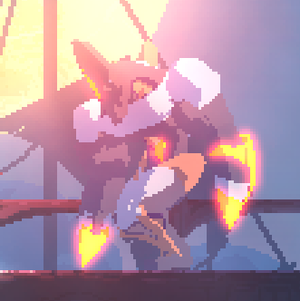 She is reached by going through the Toxic Sewers, then the Ancient Sewers, to the Insufferable Crypt.

The player must have absorbed the Vine Rune, Teleportation Rune, and Ram Rune in order to take this path. Alternatively at 3BSC+, it is possible to exit via the Insufferable Crypt from The Ramparts.

The fight can be skipped if the player sacrifices the Mushroom boi. 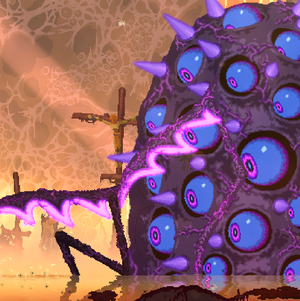 Found in the Clock Room. Can be reached through either the Clock Tower or the Forgotten Sepulcher.

Found in the Guardian's Haven. Must be reached through the Cavern on the first meeting, can be reached via a 2 BSC door in Forgotten Sepulcher afterwards.

Requires Rise of the Giant DLC.

The Hand of the King[edit | edit source]

The final boss of the game on 4 BSC and less. Found in the Throne Room. He is reached through High Peak Castle or Guardian's Haven.

The true final boss of the game. Found in the Observatory, which can only be reached with 5 BSC active, after the Throne Room and the Astrolab.

Requires Rise of the Giant DLC