There are a number of statues of the king scattered around the island, notably in the Promenade of the Condemned, in the Stilt Village and in the Graveyard.

Orders of the King[edit | edit source]

All over the island, the Beheaded finds a variety of orders written by the King. Most of these relate to the imprisonment and quarantining of criminals, infected or plain innocent people. Some of them are direct orders to high ranking public officers such as Castaing or the Alchemist.

The Alchemist's Grimoires are scattered around the island and recount his various experiments with the Malaise and how to cure it.

In the Sewers, the Alchemist was collecting mold and mushroom samples for his experiments. However, the increase in the numbers of revenants made his work increasingly difficult[7].

In the Stilt Village, the Alchemist has set up a laboratory dedicated to curing ill "volunteers". He reports that the essence of bupleurum seems to relieve symptoms[8], especially blood vomiting.

The Sanctuary seems to have been especially important to the Alchemist's research. It's the only (?) biome that contains two different Grimoires.

Information about the Time Keeper can be found in a few lore rooms, mostly located in the Clock Tower. [More lore needed]

The soldiers were given orders by Castaing and by the King, and left some letters to one another.

Promenade of the Condemned[edit | edit source]

There is a well in the Promenade which can contain a number of things.

Morass of the Banished[edit | edit source]

Nathan Drake, the protagonist of the Uncharted series is found dead in a pit[35]. He was looting sarcophagi but never managed to get back up because his rope was too short.

The blue room appears to have been a laboratory for the Alchemist, granted to him by the King as a last resort option[36] when he realized his ruthless methods were not working. Indeed, its shelves are full of various potions, vials and general scientific equipment akin to the various labs the Alchemist left all over the island[37]. In the center of this room, where the Beheaded fights an Elite Slasher, endless rows of incubators can be seen, filled with mutated bodies. They are the same as those found in the Alchemist's Clock Tower lab[11], in which he was immersing infected bodies in an experimental solution in hopes of finding a cure to the Malaise.

It is unclear whether the Slasher enemy was a result of the Alchemist's experiments or if it is just another Malaise-infected character, but the fact that it is the Alchemist's Room boss suggests it could be the case. 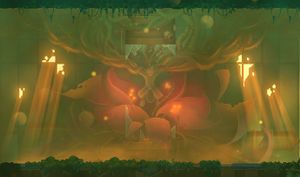 The green room is host to a variety of plant-like structures, and its walls, floors and ceiling have been colonized by vines. In the center of this room, the Beheaded fights an Elite Thorny in front of a hybrid human-plant character who seemingly broke out of its incubator. This hybrid is the result of crossbreeding experiments by the Alchemist[14], in which he tried to administer plant extracts to a human "volunteer".

There is currently no lore in the game explaining the purpose of this Torture Room. It is unclear if it was used before or after the Malaise outbreak and the Island's downfall.