Nerves of Steel is a bow-type ranged weapon which deals a critical hit after being charged for a specific duration before firing.

The Blueprint for the Nerves of Steel is found at the a tower on the end of the Ramparts. This secret area is not guaranteed to generate on all runs, and cannot appear if the Stun Grenade's blueprint spawns. If it does, the exit to the Black Bridge will not be located at the end of the map and is instead shifted to the left a little. There is a short, invisible platform between the blueprint's tower and the second-last one that allows the player to make the jump. The homunculus rune can be used to detect the platform's existence but is not required for the blueprint. 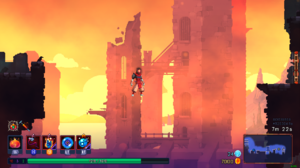