Streamer Mode is a special mode that uses Twitch streaming integration, which lets viewers of a stream interact with the streamer’s runs in a variety of ways.

Note that this mode is only available on the PC versions of the game. 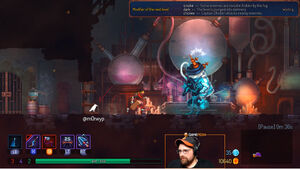 Captain Chicken is an avatar which follows the streamer around and doesn't do much by itself. Viewers watching a stream and participating in the chat can become Captain Chicken by typing "pickme".

Individuals in control of Captain Chicken can choose to forcefully use a charge of the streamer's flask, even without their direct consent. Sending a message beginning with "@<streamer name>" in the streamer's chat allow the viewer to directly talk to the streamer, using a textbox that floats above the chicken.

Community Chests are special chests that spawn multiple zombies nearby and their contents can only be accessed by destroying the chest. Viewers can also help to destroy the chest by sending relevant messages in the streamer’s chat. They give gear with the same level as those found in normal chests in the biome they occupy.

Scrolls that are unique to Streamer Mode can occasionally be found in Biomes. They will let the viewers of a stream decide what stat will be increased. Note that normal scrolls can still be found when this option is enabled.

Gameplay Modifiers are special changes to the game that occur in biomes after the Prisoners' Quarters. When entering a transition area, viewers of a stream will be able to vote for what they want the modifier for the next biome to be if the setting is enabled.

Below is a list of all modifiers that can be found in Streamer Mode:

Viewers can summon enemies such as zombies and skills for the boss such as grenades.

Viewers can vote for the next Biome the streamer will visit. However, the streamer can simply ignore this vote and choose a different biome instead.

Viewers can make small call-outs appear on the screen of the streamer when there is a nearby secret, such as a Challenge Rift or a wall rune. However, these do not reveal the exact location of the secret, which must be left to the streamer to discover.