There are now official names in the stats in game, so I'm going to change the names of the enemies to match those in-game. Matteo Allegra (talk) 14:31, 8 July 2018 (UTC)

Let's make so that the biomes indicated for the enemies are the ones they are found in at normal difficulty level. Otherwise you can find pretty much every enemy in every biome. Matteo Allegra (talk) 16:03, 6 July 2018 (UTC)

I took the "unofficial" names from the data over at http://www.demojameson.com/deadcells/dead-cells-data.html?lang=en if you want to double-check what's been added recently. Quaestcomm (talk) 16:14, 29 May 2017 (UTC)

I recently found this sprite but I don't remember having found this mob before. It's called "Doctor" 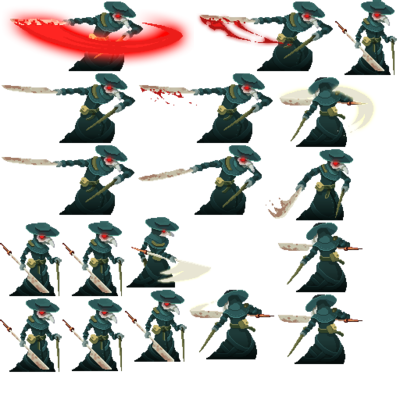 The Doctor is an old asset that has been in the game files for months. It's unclear if it will be used later (for instance in the Alchemist's biome) or if it has been scrapped like a lot of other unused assets (such as ImmortalZombie, Screamer, etc). For now I think it should not be mentioned on the wiki. -- sknot

Yeah, I have no intention of mentioning him here, I'm just wondering about it. I liked his sprites, very well worked out, looks quite like the sprites of a game called Little Fighter 2. RoxShadow (talk) 12:50, 28 August 2018 (UTC)